The FMX 2016 is over now and even if the ITFS is still running we’re already on the motorway heading back towards Darmstadt. It was a great week of inspiring talks, creative people and crazy projects.

Beneath a burning car outside the building (yeah, we also have no clue) we’ve experienced how visual communication can save the population of jaguars in amazonia. With the help of 360° camera setups their number and habitat was documented to convince the Peruvian government of establishing a Pan American jaguar corridor. Not to mention the fact that this guy Terrence Masson – with his company Building Conversation, could let a model of a house float on your business card (have a look at the augmented reality app here).

A very inspiring talk was given about women in the industry and the struggles they have to face according to pay or being appreciated for their work and ideas. The women on stage were all highly educated and very successful in their jobs but also had to learn to stand up for themselves and fight to be taken seriously. This one wasn’t about feminism but about how to reach a balance everyone could profit from. The solution: do good research, do good work, be proud of your work and publish it as there’s tons of people who are interested in it.

At the end of the day we’ve seen a lecture on project work in aka studios, how to deal with customers and impossible-to-meet deadlines. It was a sad surprise to hear how their months-long projects sometimes never saw the light of day due to a customer’s change of mind. I hope they still got paid well.

We’re on pins and needles to start working on our projects again. The impressions we got here at FMX were great and will keep us motivated for a long time – at least until next year. Darmstadt is approaching so .. 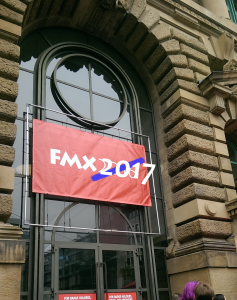